By continuing your visit to this site, you accept the use of cookies. These ensure the smooth running of our services. Learn more.

“I’m glad you made us smile,” said Joanna Learner, during a photo shoot for this article with husband Bob, recently at their home on Battle Creek’s far westside.

A native of San Antonio, Joanna’s parents died when she was young, and she recalls spending many of her own young years helping raise 3 brothers. 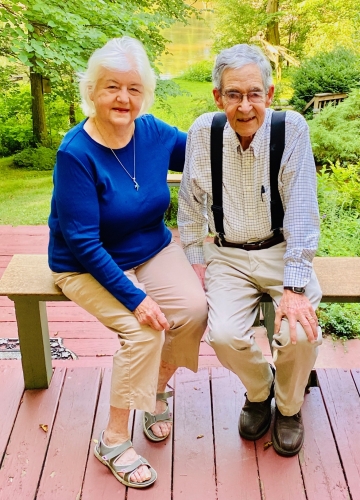 She attended Texas Woman’s University in Denton, and met Bob, a native of Chicago, while teaching an evening ceramics class in San Antonio, while he was an Army medical corpsman at nearby Ft. Sam Houston.

Bob’s father was a medical doctor, and his family grew up in Illinois. Bob graduated from Beloit College in Wisconsin.

A quiet spoken but articulate man, Bob moved their family to Battle Creek in 1971, after seeing a professional magazine ad for an opening at Kingman Museum here.

He would serve as the Executive Director of the Kingman Museum for 26 years.

The Museum was owned and operated most of that time by the Battle Creek Public Schools, and It is hard to find many Battle Creek natives over 50 who do not remember elementary school trips to the Museum.

Joanna, with prior teaching experience, continued to create art in ceramics, metal, and as a painter.  She was director of the Battle Creek Art Center’s “Arts Go to School” program, director of academic enrichment for the Battle Creek Public Schools, and taught 7 years at Kellogg Community College, while also earning a master’s degree from Western Michigan University.

Both have long been equally engaged as champions and advocates for the arts and education over many years in Battle Creek.

Now in their early ’80s, the Learners have lived in the same delightful rambling little house for 48 years.  It is reached at the very end of a street that near parallels a bend in the Kalamazoo River.  The Learners have expanded the home over the years and built Joanna a working art studio.

A wooden deck wraps around their home, and a visitor can toss a stone from the deck down into the Kalamazoo River, the home nestles on a small rise so close to the water’s edge.

Joanna takes pride in her sometimes-outspoken love and support of the arts and their importance relative to the education of children. 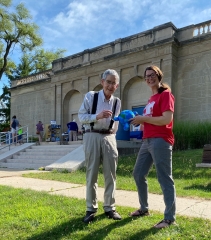 “I get that from my Mom,” she said. Her mother went to college when “that just wasn’t done.”  She graduated from Kansas State University, took 3 trips to Europe. “She inspired all of us. And so, I have never set limits on myself,” Joanna explained.

Born in a cabin in Colorado, Johnna was to see her father die when she was just in the 4th grade. The cabin in Critchell, Colorado is still in her family.

One of Bob’s hobbies is writing songs about dinosaurs.  That’s right, dinosaurs.  And he has a book of his songs scheduled for publication in several months. 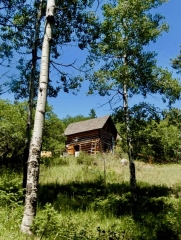 He takes pride in all the programs and exhibits, and educational opportunities provided at Kingman Museum during his many years; and is excited to see what innovations Eltine DeYoung, the Museum’s new Executive Director, will develop.

The basement of the Museum is full of natural science artifacts collected during many world travels by the Museum’s first director, Edward Brigham.

“There’s a lot of potential there,” Bob observed, suggesting expanding the Museum’s physical size, and upgraded exhibits “could make it a very major educational and recreational draw for local and out of town visitors, much like what has been achieved by Binder Park Zoo.”

The Learners are looking forward to next year, the Museum’s 150th Anniversary